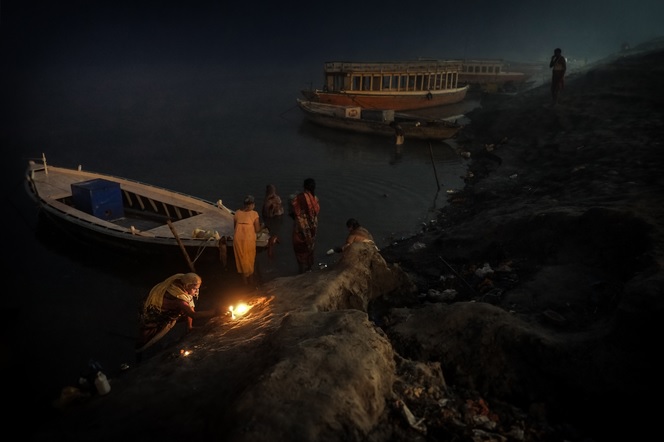 This photograph, taken with a Fuji X-pro1 won the NATIONAL GEOGRAPHIC PHOTO 2012 and was later disqualified.

For a short period of time, one week perhaps, I have felt the pleasure and sorrow of being the winner of the 2012 National Geographic Photo contest and being later disqualified. If you are interested here is the story: “National Geographic, how I won and lost the contest in less than one second”
In any case this proves that the FUJI X-pro 1 is more than capable of reaching all kind of high summits in the photographic world.

This photograph was taken at Asi Gaht, Varanasi, more or less 5:45 am. I usually stay next to this precise Gaht when in Varanasi. I just had finished my leading my last expedition to India with Nomad Photo Expedition. This said, I obviously know the place 🙂 . The extraordinary thing about the ghats is their tremendous transformation which lies on the level of the Ganges. On this opportunity – one month ago- the level was low and, unfortunately, the image, from the steps of the Gaht, was not very pleasant: mud, garbage, etc… I decided to go down, next to the Ganges.

Even with the  XPRO-1 outstanding low light performance, I did not want to risk the picture and decided not to go beyond 2.500 ISO. This shot was done with the 18mm (27 mm equivalent) 1/8th of a second , 2.0 f.  As you will surely understand, the low speed made the things even more difficult. As well as the mixture of lights: I had to put together threee sources of light, a moving scenario and all this with only twenty minutes of “good” lighting. My main concern was to decide on the exposure. In theory I should have set everything to a right hand side histogram to prevent the grain should I need to work later on the picture with LR or PS. My decision was -and I think that it was, for once, the right one- to underexpose (you do not have time for a serious measuring) two stops less than what my “multi-I don’t knowwhat ” exposure setting was telling me, in order to prevent as much overexposure on the candle lights as possible. I knew that the candles would be out of range if I did not underexpose.  The different sources of light were a bit tricky: candels, lamps from a nearby street, the night. And the fog, wich is also an issue as it reflects the light, normally fools the meter readings which will, again underexpose.

I keep visiting the Gaht each morning, early in the morning and at dawn, with my camera, a Fuji X-pro1, and two prime lenses: a 18 mm  and the 35 mm. I feel more at ease with the wide.

At this early time, before dawn, you have barely time for, perhaps, four to five different framings as the light that I want lasts for no more than 20 minutes. It is quite stressing to decide the setting depending on the things that are happening around you: lights, candles, people, specially knowing  that there is not much time left and everything will disappear as people move and change position continuously.

On this opportunity, suddenly, a big group of pilgrims, obviously coming from villages (they are more prone to be photographed) came into the Gaht. I literally run to fight for my position in the middle of the mass. I have lately discovered that the ” I am a professional photographer” approach works far better than the “shy” approach: cameras, tripods, lens bags, an Indiana Jones hat 🙂 . With the poor light and the mass, people have little time to care about me: they came to Varanasi for their ritual morning bath, they are not in the mood of losing their time arguing or discussing with an -obvious- foreigner in disguise (disguised as a photographer).
All this to advance that I was well before the “final” shot at the place. Probably at 5:00 am for the “final” shot taken at 5:45 am.
This was possibly the 6th shot in the same position. I set the tripod, decided on the frame and light and, using my mechanical shooter, (Fuji Xpro1 does not have an electronic shooter !), and not looking through the camera, (as in old good time) I shoot..

Later came the winning and losing of the National Geographic Contest, but that’s another story.

If you enjoyed this story subscribe to the free Newsletter

Harry Fisch, polyglot and originally a lawyer and businessman, has been a photographer for more years than he cares to remember. He has photographically documented more than 27 countries through which he has traveled, concentrating since 2002, on Asia, especially Thailand, Cambodia, Laos, Vietnam, Nepal and India.

Winner of the 2012 NATIONAL GEOGRAPHIC PHOTO CONTEST, and later disqualified, he has also been a finalist in the 2013 SONY WORLD PHOTO AWARDS and selected in 2010 by Photoespaña—possibly the most prestigious Spanish photographic event—in the section “Discoveries”. His work has been published among other photography magazines in “La lettre de la photographie”, which was nominated best Blog of 2011 by the prestigious magazine LIFE.